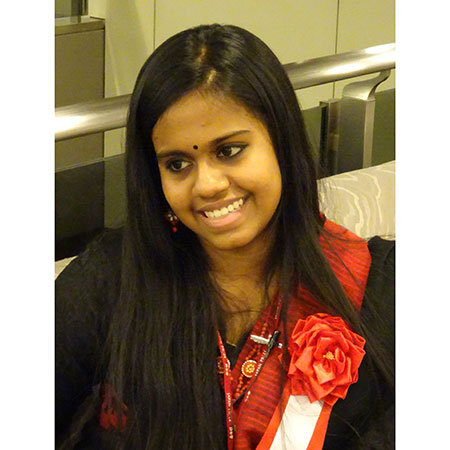 The winners of the JAPAN PRIZE 2016 were announced and awarded in Tokyo on November 2, and the Grand Prix Japan Prize of the Audiovisual Division went to “The Amina Profile (Canada)”. In the TV Proposal Division, the Hoso Bunka Foundation Prize for the best proposal was awarded to “The Girls are not Brides” by Dhrupad Communication – Media for Education and Development, Bangladesh.

The TV Proposal Division is intended to support the realization of ideas for educational TV programs in countries/ regions with limited budgets and technical facilities. The winner receives a cash prize of U.S. $10,000 and is required to complete and air the proposed show within one year.

This year’s award-winning proposal, selected from among 34 entries from 18 countries/regions, focuses on an age-old tradition in Bangladesh that forces girls to marry at very young ages mainly due to poverty, consequently affecting their chances of education and independence.

Ms. Novera Nikkon who received the trophy on behalf of her organization from President of the Hoso Bunka Foundation, Dr. Yasuharu Suematsu at the awards ceremony, said with enthusiasm, “We do know that our documentary alone will not solve this problem, but if it makes even one person deny child marriage at a time, we believe the number of victims will eventually drop to zero”.

Being an 18-year old herself, she couldn’t ignore the young girls’ environment, saying, “I thought I should do something about it because that could have happened to me as well”.

She hopes as many adults as possible will watch their show because child marriage cannot be stopped without their support. In order to do so, however, they need to make extra effort since people in some rural areas don’t even have electricity. So, in addition to broadcasting the program on a TV channel, they will make the best use of ten projectors they own and try to reach the most people possible.

During the contest week from October 26 through November 2, this year’s five finalists that had passed the preliminary selection were required to go through a workshop in Tokyo organized by the JAPAN PRIZE and learned how to make an effective presentation of their proposals before making a pitch to the jury that would decide the winner.

The Japan Prize, established by NHK as an international contest for educational media in 1965, has made a significant contribution to developing educational content all over the world. This year’s 46th contest received 316 entries in total from 58 countries/regions around the world.