The winners of the JAPAN PRIZE 2019, an international contest for educational media, were announced and awarded on November 8. In the TV Proposal Division, the Hoso Bunka Foundation Prize for the best proposal, selected from the 5 finalists out of 39 entries from 19 countries/regions, was awarded to “Pumzi & Vuyo” presented by Pixcomm, a 2D animation studio of South Africa. At the ceremony held in Tokyo, Mr. Nicholas Buchanan, Producer of the production received the trophy from Dr. Junichi Hamada, President of the Hoso Bunka Foundation.

“Pumzi & Vuyo” is an animation program aiming at teaching preschool children about the importance of environmental conservation through two animal characters on the endangered species list. Pumzi is a fun, bubbly and clumsy young girl penguin, while Vuyo is a very wise vulture who speaks like an adult. These two contrasting characters and the music being played will help African children learn the significance and seriousness of various environmental issues in their continent in an enjoyable manner.

In a one-on-one conversation with Dr. Hamada after the ceremony, Mr. Buchanan expressed his gratitude by saying, “This prize is very important for us. In Africa that has 56 countries, there are only thee on-going preschool animations because the situation is very difficult for us to create a new one. But with your support, now we can make it four, and one of them will be an ‘educational’ program.”

In his finalist presentation to the jury on November 6, Mr. Buchanan emphasized the significance of having these two endangered birds, one living in the sea and the other in the mountains and cliffs, in order to cover all ecosystems on the planet and to make children of next generation realize that “if you save the bird, you save the environment”. Another meaningful element in the animation, says he, is the “Baobab tree” where the two characters live because it’s a symbolic African tree that has started dying due to global warming.

Following the completion of all five finalist presentations, there was a screening of the finished program of the 2018 Hoso Bunka Foundation Prize winner “Life” produced by Vientos Culturales A.C., Mexico. Then after the screening, Ms. Elke Franke, the producer of the NGO talked about the show and had discussion with the audience. 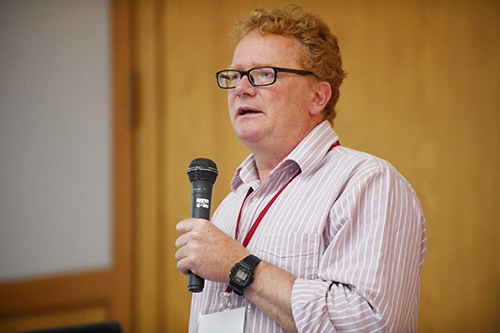 Q) Congratulations on winning the Hoso Bunka Foundation Prize. First of all, would you tell us about your professional experience as a producer?
Nick）I started off with comic books, Manga, then started slowly learning how to do animation, and moved from doing football and succor comics to educational comics, and then educational animation as well. But there’s a very difficult platform to find for educational animation, so the Japan Prize is very important.

Q) Also, would you talk about your company, Pixcomm?
Nick）Pixcomm is a 2D animation studio. We’ve worked out of the township or a shanty town in Cape Town, South Arica for about five years, teaching and training people how to animate, and we started our own series which is broadcast across South Africa and Africa that called “Jabu’s Jungle”. NHK film crews actually visited us there maybe three years ago. That is our main series, but we wanted to do more, which is why we entered “Pumzi & Vuyo” for the Japan Prize.

Q) How did you come up with the idea of this animation, “Pumzi & Vuyo”?
Nick）We started with a rhino character with 3-year-old children, and then we spoke more to the experts and the scientists, and they suggested that we use birds that are endangered because if you can save the birds, then we can save the world. We save the trees and the plants, the soil and the water. So we looked at two different birds living in different environments, a penguin in the sea and a vulture up in the mountains, which allow us to cover all of the ecosystems in Africa between the two characters. So that was the thinking on the advice of our environmental experts.

Q) So you thought of saving the environment first and spoke to the scientists. Would you tell us more about the purpose of making this animation?
Nick）Africa like the rest of the world, we have global warming and climate change. We have natural disasters coming more and more regularly. The city that we live in almost ran out of water. We were about 60 days left of water during a drought. So the idea was to try and find a way to teach the next generation, the children how to do things properly, and that’s where the animation works well.

Q) Then you specifically chose two kinds of endangered species, penguin and vulture.
Nick）Yes. That was more for storytelling. So if you have two characters interacting with each other, the one has strong characteristics, the other one has weak characteristics. It makes it easy for children to see the lesson. The one character doesn’t understand and learns from the other character. It makes more work for animation having two characters, but I think once we create it, then it’ll be good.

Q) Which character is strong, and which one is weak?
Nick）The penguin is the weak one, young, still doesn’t know and naive. The vulture is clever, but he speaks like an adult in words children don’t understand. So the penguin must try and understand what the adult is saying with the help of the children.

Q) Can you make it possible to have two people on different levels talk with each other?
Nick）No, I’d say when we’re writing for children, you’re writing for them to understand, but you’re also writing for their parent, the mother and the father, and if there’re questions that child have, they can answer them.

Q) You’ve got these very cute and beautiful characters. How did you create and design them?
Nick）We work with government college students and interns of animation major, and they came from the students. I still want to make them cuter, and now as we have some money from the foundation, we’ll put some more work into that because that’s the thing that makes a good program or a bad program. Will the children like the characters? So need some more research there.

Q) How would you spread your show throughout Africa and beyond?
Nick）Africa is still very much TV, not Netflix or Internet YouTube because it’s so expensive. People can’t afford Internet, so they watch free TV. We have other show in 40 African countries in 5 languages, so we can do that with “Pumzi & Vuyo” and I hope more languages.

Q) Why is it so expensive to use the Internet there?
Nick）To build the infrastructure for internet costs a lot, so they charge every consumer a lot of money. If we’re watching YouTube, it would cost maybe $10 for half an hour, so you can’t especially for children. Maybe in ten years’ time, it will be cheaper, but for now, we can’t. So it must be on TV.

Q) The HBF was established aiming to contribute to the development of broadcasting culture. What does broadcasting culture mean to you?
Nick）Our broadcasting culture is non-existent. The broadcasters have been bankrupt for four years now. I made content in 2016. They can’t pay. So we have to give it to them. As a producer, it makes it very difficult to try and make a new show. Without Japan Prize, I couldn’t dream of another show. Broadcasters owe everyone money as they can’t pay. So it’s very difficult, especially in animation, even live action is hard, but animation is more expensive, more labor-intensive.

Q) Do you have any idea to improve the situation of broadcasting culture not just in South Africa but anywhere in the world? What is the key?
Nick）For Africa, I think the key would be free Internet because then we’re not relying on the corrupt government, then children anywhere in Africa can access YouTube, content from Japan, content from America. Then all of a sudden, children are the same. Hearing them in a few years may be a hundred years’ time, all children’s accents will be the same because they learn to speak from YouTube. Even my daughter speaks with an American accent because she can watch YouTube. The rest of Africa can’t watch. I think Internet can make things easier.

Maybe one another thing is we’re slowly moving to digital broadcast where we can have hundreds of channels, and now with our cellphones, anyone can make content. So if we can give Africa free Internet, give communities their own TV station, and they can make their own news. We have tried this in the townships, and it works. People want to know local news.

I went to India in February. Six years ago, they started giving everyone free Internet every day. Now in India every day, you get 1G of data free, so YouTube and Facebook everything is big.

Another interesting story on India which I found fascinating was 20 years ago, no Indian animation, now 10 billion dollars every year. They weren’t Walt Disney. They don’t want anything but Indian, and maybe Africa will do the same, but it takes 20 years.

Back to: Hoso Bunka Foundation Prize 2019